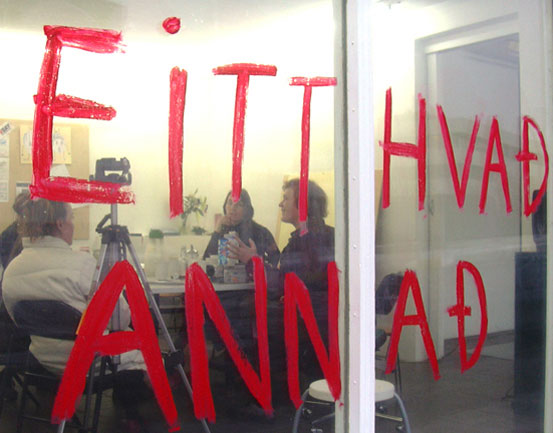 Here and now I would like to open a workshop under the heading of SOMETHING ELSE. I would like to tell you in a few words why I decided to choose this path and explain the underlying concept of the workshop. We are at a cross-roads,Icelanders and all of Mankind – there are ominous signs and portents in the world, there is imminent war, and here in Iceland there are serious differences of opinion about our use of this land. 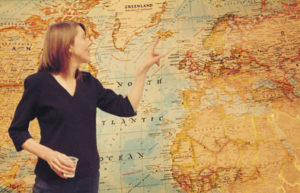 There are many who feel that we are subject to cold materialism where everything is assessed based on cash value and the demand is for continuous economic growth. Another side of the same coin is the energy greed in the world. It seems insatiable and we see it, for example, in the manufacture of larger and heavier cars, which can weigh up to 3 or 4 tons and swallow 100 litres of fuel without effort. Conserving energy is definitely not cool. Energy greed is changing our modern economies into junkies, of a sort, craving bigger and bigger fixes. Up to the point where the lethal injection of war becomes the only solution. 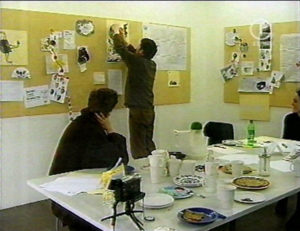 As far as I know, the fundamental question of philosophy is: what is a good life? The only answer offered in our time is consumption, more consumption. In this respect, modern humans are enduring spiritual poverty, intellectual monotony. There is a demand in the air, or should we say a hope: A hope for SOMETHING ELSE – People want something else – people demand something else – people may not necessarily know what that something else is – but we are entitled to our wish – it is extremely important to possess this wish – But the reply from our leaders is: If you don’t have any solutions you shouldn’t complain.

I want to open a forum here for something else – people can bring in suggestions – discussions – write texts – draw pictures – set up models. The space will no doubt change in line with whatever happens here and will end up full of ideas, sketches, pictures, texts. The idea is to collect everything together in the end and publish it as a record of a certain situation – certain feelings – certain hopes and expectations – the year 2003. 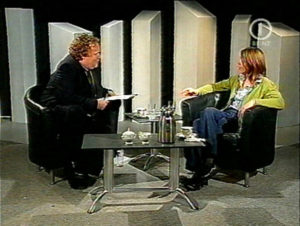 The picture on the floor out here shows land – a glacial river, a spring-fed stream, run-off stream, lava, hot springs, swamp moss, typical Icelandic highland landscape. The waste lands. The waste lands are the uninhabited wilderness that characterises Iceland, a virtually unknown region – the land in the picture is in a certain way a blank page – we look upon it from above, like God – and we are God. We – and by us I mean the people in the land – control the land – this is our land – this is not the politicians’ playground. The problem is that there are so many people who do not realise this – we think that the politicians own the land – that is a complete misunderstanding. – The picture on the wall also shows land in formation. It shows how Man conquers the bleak hills – and eventually transforms them into sheltered areas with trees and hedges; human habitations with shelter from the harsh northern wind.

The space here in Gallery Hlemmur is a blank page, it is intended as a place for work on ideas, for discussion and creativity. Artistic space is a fantastic forum for such work. Artistic space is subject to different laws than other spaces; artistic space incorporates the freedom of the spirit.

Fortunately, there are no neat answers to this question; they are manifold and none of them exclusively true, so to speak. Frequently art is deemed according to the individual artist’s chosen media: painting, sculpture, etc. Well into the 20th century art and artistic value could without fail be found within these parameters. The twentieth century, however, introduced countless new definitions about the essence, characteristics, roles and objectives of art. Even today many of these days still seem to be valid, but now more or less simultaneously – diversity is the order of the day and the artist is freer than ever.

In Europe questions about the relationship of art and society and the role and responsibility of the artist surfaces regularly, not only amongst traditional artist but all artists, writers, dancers, etc. The first artists to shed the shackles of received ideas about art, its form and role, were: futurists, dadaists and surrealists, and others. Of course, these movements also influenced other art forms.

In the sixties and seventies similar movements took center stage, such as Fluxus, that wanted the unification of art and everyday life. One of its champions was the German artist Joseph Beuys. Fluxus gained considerable ground here in Iceland, for example in the works of Magnús Pálsson. The discourses and discussions about the artist’s role in society were very much in vogue in the seventies, eighties and nineties decades. For a while, the discussions event went too far, sometimes bordering on political correctness (PC). This was at the heyday of minority groups while; white, heterosexual males were under attack. This period has run its course, so to speak, but discussion about art and society has continued, at least in certain artistic groups.

In the last Dokumenta exhibition in Kassel, discussions focused on actual movements, trends and global dialogues. The huge exhibition is held every four years and one of its main purposes is to update the situation of art, its discourses, ideology and trends.

One of the features of the exhibitions was the non-stop screening of VHS tapes or DVD’s. The main value of which may have been its documentation, for example about the situation in third world countries.

Now, Ósk Vilhjálmsdóttir has broken the silence about such matters in Icelandic art. Ósk is an artist who in the last few decades has presented a body of work that focuses on society. This time around she chooses art as a forum in Hlemmur Gallery. For this purpose she has installed chairs, tables, a blackboard and coffee for the spectators, the artist and the public.

The title of the exhibition, “Something else”, refers to the fact that some of us may be whishing for something that is different from the tenets of the consumer society. For the duration of the exhibition, Ósk host’s discussion-meetings in which the subject will be art and society, what constitutes good live, etc. Everybody is welcome to let his voice be heard, orally, by painting or writing texts on a blackboard.

This is a valuable initiative on Ósk’s part: For one thing, dialogues touching on these matters is long overdue amongst Icelandic artist and, for another, only a few Icelandic artists seem interested in breaking the fetters of received forms we are all so familiar: to make things and exhibit them in “traditional” exhibition rooms. By this, I am not saying that that effort is bound to be futile or uninteresting, but rather that Ósk, in her exhibitions, is drawing attention to a sort of subculture in the Icelandic artistic milieu that seems to have been more or less shunned. Recently, there has been mention about the so-called cute-generation, a generation of quite promising, young artists who most certainly work in a varied and determined ways in their art. Their attitude as regards the role of the artist is however, at times quite traditional. In this context the question about the responsibility of the artist in his society is an important one.

In her work Ósk has taken the first step in the direction of opening up a dialogue, not only among artists but society at large. I am not convinced that the ordinary pedestrian will pay a visit to Gallery Hlemmur to vent his ideas, but in any case he is invited and hopefully many of us will gladly take the opportunity to let his voice be heard.