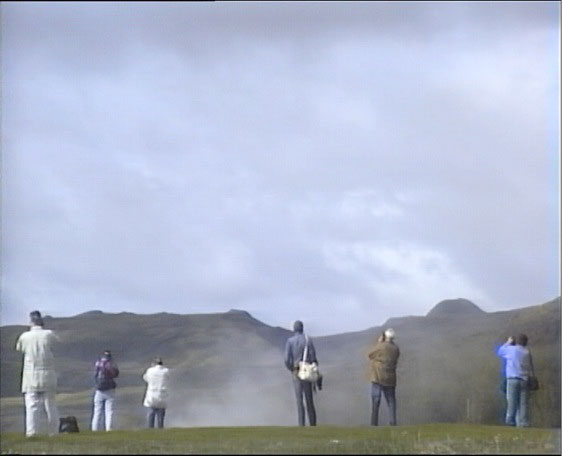 Ósk Vilhjálmsdóttir‘s ‘Room Temperature Geyser’ is a narrative work which shows a hot spring shooting out of the ground in real time. The tourists who have gathered around it try to capture the eruption on film but such an attempt requires both patience and speed, for a geyser can be capricious, a real tease. The scene is shot with a static camera, with no concern for the spectacle. What interests the artist is not so much the eruption of the famous geyser as the ritual of human behaviour in the face of a natural phenomenon. The human figures are seen from a distance and nearly always have their back to us: virtually immobile, waiting (eight minutes), they seem gradually to lose all personality, and the process of reification grows stronger with each repetition.

At sea level water boils at 100°C, but at higher altitudes the boiling point becomes lower as the air pressure decreases. Conversely, the boiling point is raised with increasing pressure, as exerted by a column of water. This relationship is known as ‘the boiling curve’. The temperature of water under hydrostatic pressure, deep in the earth’s crust, may be up to several hundred degrees centigrade. From chemical studies it has been calculated that the temperature of the deep geyser reservoir is around 260°C.